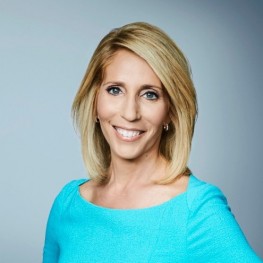 Who is Dana Bash?

Dana Bash is known as an American journalist and news anchor. She is most famous for her work on CNN. She was born in 1971 in Montvale, New Jersey. She is the daughter of an ABC News producer and senior broadcast producer of ACS News. Her mother is an educator in Jewish studies and author of many books like ‘A Touch of the Sacred’ and ‘Jewish Moral Virtues’. She has a brother who is a producer of Video news and video public relations under the name DMS Productions.

Dana Bash's personal life was filled with controversies. Her personal problems and heartbreaks never affected her professional life. Dana Bash never had a stable marriage life. She was married and divorced two times. In 2008, Dana Bash married a fellow correspondent from CNN, John King. John King converted to Judaism, before marrying her and he was a Roman Catholic, by birth. Before her marriage to John King, she was married to Jeremy Bash. Jeremy was the chief of staff of the secretary of defense, Her first marriage ended very shortly, due to lack of understanding, between the two

King had a son and a daughter from his first marriage that ended in divorce. In 2011, Dana Bash and King had a son together. When their son was born, John King sent an email to his colleague, stating that their son would be named after the two heroes of their life, John’s mom and Dana’s grandfather. Her second marriage life was heart-wrenching as she had to face divorce for the second time. In 2012, the couple announced that they got separated. There was no definite indication of what caused them to separate in less than four years of their marriage.

There were rumors about John King having an affair with one of the correspondents on CNN, after their announcement of separation. They started living in separate houses, even before their baby was one year old. When asked about the divorce, Dana Bash said that they would continue to co-parent their son, with maximum professionalism and cooperation. She also requested the media to respect their privacy, during difficult times.

There were many controversies about Dana's affair with Ron Paul on many internet sites, but nothing was proved. It was revealed that Dana Bash was not in any kind of personal relationship, with another man after her separation with John King.

Dana Bash got a big break when she became the on-air reporter in Capitol Hill specializing in coverage of the US senate. Her career life has had many significant milestones. She now works as the chief congressional correspondent of CNN and was awarded the Dirksen award. She currently covers the Capitol Jill beat along with John King and Jessica Yellin. She has been a staple during the coverage of presidential elections. She often does personal interviews with the candidates of both political parties. Her annual salary is estimated at $450,000.