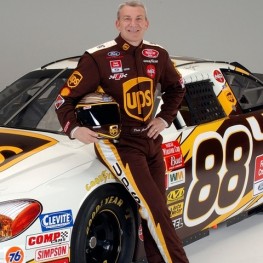 Dale was born in Conover North Carolina. His whole linage is NASCAR, he is the son of Two-time Grand national Champion Ned Jarrett, he is the younger brother of Glenn Jarrett, Father of former driver Jason Jarrett, and cousin of Champion Handgun shooter, Todd Jarrett. Dale’s sister Patty is married to his former crew chief Jimmy Makar.

Dale started his career at the Hickory Motor Speedway owned and operated by his father. Dale got married young while still in High School; the details of his first marriage are sketchy. No one knows anything about it other than it was very short lived. At 18; he sired a son Jason Jarrett, from his first marriage. He then married Kelly Jarrett; after 36 years of marital bliss, they are presently legally separated. Allegedly there was infidelity on Dale’s part with a woman named Buffy; the girlfriend of a good friend of his. Kelley nor Dale have commented about the rumors or their separation. With the separation not being finalized as of late, that could be one of the reasons for all the silence. Dale’s net worth right now is approximately 1.8 billion dollars. Kelley may be soon rolling in the dough herself. Despite his personal woes he still continues to make foot holes in the entity of NASCAR. There haven’t been many challenges he couldn’t meet. He is a very driven individual and it shows.

Not only was Dale a NASCAR driver he became an announcer for the ESPN/NBC broadcasting team after his retirement from racing. Today he is ESPN’s lead NASCAR analyst. Golf is one of the many things Dale enjoys in life besides racing and was once in a commercial with Phil Mickleson, Michael Jordan and Wayne Gretzky.

Dale now, 57 years old; owns a dealership in Indian Trail North Carolina. He currently resides in Conover North Carolina. In 2014 He was inducted into the NASCAR Hall of fame. In his career he has won 32 cup races, a multitude of championships... Including the 2000 Daytona 500, Winston 500, and Budwiser shootout just to name a few. He is a pillar in the NASCAR community. His long standing stint in NASCAR was not without injury. He has suffered concussions and other minor injuries but that didn’t stop dale from tearing up every race he participated in. 24 years in the game and he is still all about any and everything NASCAR. His last race was a win at the Talladega Superspeedway. Retirement didn’t stop this racing giant not one single bit, Dale even branched out into business ownership not only does he own the dealer ship but he also owns a fantasy sports site, dale’s racing adventure, not to mention his Busch’s series team. He is rolling in the dough and loving every minute of it.

He has traveled the world and been on almost every track in NASCAR. His legendary stature will reverberate throughout the ages. He is well respected and so adored by his peers who share his love for NASCAR.