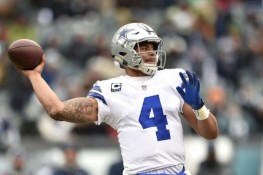 Dak Prescott, born Rayne Dakota “Dak” Prescott on 29th July 1993 in Sulphur, Louisiana, has been a U.S. football quarterback, and plays for Dallas Cowboys of the National Football League (NFL). He was associated with Mississippi State Bulldogs during his college days.

He was drafted by the Cowboys in the 2016 NFL Draft’s fourth round. Initially, he was chosen as backup for the original starter Tony Romo who becoming injured, Prescott became the starting quarterback for the Cowboys. He has a number of records to his credit including the NFL Offensive Rookie of the Year.

He was born to Nathaniel Prescott and Peggy Prescott. His father had been an African-American. His mother, Peggy Prescott, who had been working as Manager at a truck stop, died on 3rd November 2013 after a prolonged illness of colon cancer. He has an elder sister named Natalie Prescott Smith, and two brothers namely Jace and Tad. He is a U.S national, and his ethnicity is African-American.

He joined Haughton High School, Haughton, Louisiana. He started playing football during his school days, and was associated with Buccaneers during these days. While he was in school, he was adjudged the 2010 District 1-AAAA Champion.

Prescott has not married as yet, and is single. However, he is in relationship with a girl named Dallas Nicole Parks. He has been dating her since September 2016. Dallas, a model, has been associated with Playboy for modelling. Prescott and Dallas have been constantly posting pictures on social media accounts. Moreover, he had previously been in relationship with another lady named Kayla Puzas whom he dated in 2014. They also posted joint pictures on social media accounts, but they broke their relationship in 2015. Since, he has not married, he has not divorced anyone.

Prescott started his professional career in 2016 when he joined the Dallas Cowboys. However, prior to that he played football with different teams during his school and college days. He was drafted by the Dallas Cowboys in fourth round of the NFL Draft in 2016. He chose to wear #4 during the minicamp for rookies in deference to the memory of his mother whose birthday has been 4th of September. He has been the first quarterback in the history of the Dallas Cowboys to wear #4. He was associated with the Dallas on a four year contract for $2723393 along with a guaranteed signing bonus of $383393.

He has a body of an athlete. He is 6’ and 2” in height, and 103 kg in weight. His hair colour is black, and his eye colour is brown. As for his biceps, chest, and waist are concerned, they measure 16-47-35.5 inches. The size of his shirt is 4 (US), but the shoe size has not been declared. Presently, he is not involved in any controversies or rumours. In both professional and personal life, he is free from any rumour. He is a straight forward man, not much concerned with others. His net worth is not known.