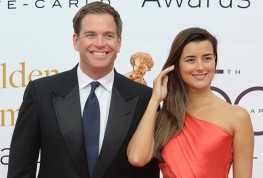 She was born to Francisco de Pablo who worked as a disc jockey and Maria Olga Fernandez, her mother took up a job in Florida, because of which Cote De Pablo shifted to the states. There she went to Arvida Middle School and New World School of Arts, where she is known to have studied Musical Theatre which probably led to success in her future. Midway through her school approximately in her 5th grade, she figured out people had the problem to pronounce Maria Jose. So she asked them to call her Cote instead giving her the well-known name Cote De Pablo. For her higher studies she went to Carnegie Mellon University located in Pennsylvania, where she further showed her interest in music and theatre and studied it and appeared in numerous plays, including ‘A Little Night Music’, ‘Indiscretions’, And ‘The World Goes Round’ and she graduated from Mellon university in 2000 with a degree in Fine Arts in Musical Theatre.

After graduation she worked through her struggle to succeed in her career, she started working as a waitress in an Indian Restaurant located in Manhattan and an Italian cafe in Brooklyn for a better financial situation. She began with working in commercials and later got parts in NYC Public Theatre on a TV show called All My Children. She is known to have played the role of Marguerite Cisneros on a broadcast on Fox Network called 'The Jury' but it ended soon. Something similar happened later in 2005 her to be debut Broadway in which she played the role of Dolores Fuentes closed after a trial run.

She is best known for her role of Ziva David as an NCIS agent in a homicidal drama series called NCIS. She auditioned for the role through a video tape and was later asked to a screen test in Los Angeles so she had to fly in. The network executives made arrangements to act to test her chemistry as her second audition. Her impressive audition, she was approached by the producer himself to tell her that she has been selected for the role. This role also highlighted a major quality of her of being brave in a world of men dominance. Her role in NCIS brought her a number of trophies and awards like Imagen Award at the Imagen Foundation Awards and above all won her the priceless gift respect and appreciation for her talent.

As for her singing talent, she utilized it well as well as she staged a part of Tom Waits' song "Temptation" on the NCIS episode itself. And few of her more singing talents can be portrayed by her performance in Temptation and Cry Me a River. She was in a long-term relationship with actor Diego Serrano but seems to have had a break up in June 2015. She is not married yet and resides in LA. The measurements of her hard work can be done by her several episodes at NCIS of injuries which have increased her net worth in the industry and given her a stronger bio.