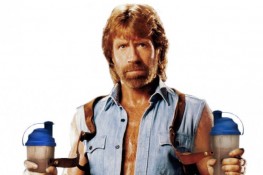 Carlos (Chuck) Ray Norris is an eminent scriptwriter, producer, and actor. Chuck has served in the United States Air Force for a period of 4 years. Chuck is also adept at martial arts and has starred in many illustrious actions films.

Chuck Norris was born on 10th March 1940 to Wilma Norris and Ray Norris. Chuck has confirmed that he has Irish and Cherokee ancestries. Chuck's father worked as an automobile mechanic and was a binge drinker. Affected by his father drinking problems and financial plight of his family, Chuck was an introvert throughout his childhood. Chuck graduated from North Torrance High School in 1958 and soon after his graduation from high school he signed up for the Air Force.

In December 1958, Chuck married Dianne Holechek. Chuck had one child with Dianne who was born in 1963. Their marriage lasted for 30 years until finally, they divorced when Chuck had an extramarital affair. From this affair, Chuck has a daughter Dina, whom he did not meet until she was 26. Chuck married Gena O’Kelley a former model in 1998. Gena is 23 years junior to Chuck and the couple delivered twins in 2001. Chuck has a passion for speed which he quenches by participating in various powerboat competitions.

While in the Air Force chuck was posted in South Korea where he developed an inclination towards martial arts. While in South Korea chuck took lessons in Tang Soo Do which earned him a black belt. Soon after, he received an honorable discharge from the Air Force in 1962, he returned to the United States and established martial arts schools in various parts of the United States.

Chuck has trained many renowned celebrities like Donny Osmond, Priscilla Presley, and Steve Mcqueen. Chuck has also participated in many martial arts tournaments and has triumphed against notable martial artists like Skipper Mullins, Arnold Urquidez etc.

Chuck’s first stint at acting was in the movie “The Wrecking Crew”, however, his popularity rose to a new height after his appearance in the film “Way of The Dragon” as Bruce Lee’s rival. In Hong Kong, the film grossed HK$5,307,350.50 thrashing all previous records set by Bruce Lee’s films. His first role as a solo star was in the film “Breaker! Breaker!” in 1977. After “Breaker! Breaker!” Chuck has appeared in many prominent movies like “The Octagon”, “Lone Wolf McQuaid”, “Forest Warrior” etc. His popularity started fading in the early 90’s, no longer able to make hit movies, he decided to try his hand at the small screen.

On the small screen, he was cast as Sergeant Cordell Walker in the series Walker, Texas Ranger. The show was a great success and aired for eight seasons from 1993 to 2001. Chuck as also authored several books. In 1988 he has published his autobiography “The secret of Inner Strength”. Chuck has also authored several self-help books like “The Secret of Inner Strength: My Story” and “The Secret Power Within: Zen Solutions to Real Problems”.

Chuck’s writings truly reflect his contemplative side. Chuck’s net worth is estimated to be around $70 million. Chuck Norris is a multifaceted celebrity whose life and times can be compiled into an engaging biography.