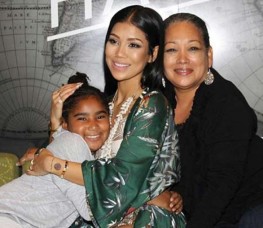 Christina Yamamoto is famous for being the mother of popular R&B singers, Mila J and Jhene Aiko.

Christina Yamamoto was born on February 18, 1958, in Inglewood, California. She is of mixed ethnicity and has Japanese, American, Spanish and Dominican roots in her family tree. She herself married a Black man who she had children with. Her offspring were full of different cultures which led to their unique upbringing.

One of her daughters, Mila J was born as Jamila Akiki Aba Chiombo. She grew up to become a proficient and beautiful R&B singer. She has released some hit songs like Pain In My Heart and My Main. My Main was about her best friend, she always valued friendships because of the lessons that her mom passed on to her.

Another one of Christina’s daughters, Jhene Aiko is also a singer known for her hits like Bed Peace featuring mega rap star, Childish Gambino. She gave birth to a daughter named Namiko Love who Christina is proud to be the grandmother of. Aiko at present is dating rap star, Big Sean. Aiko was given a BET Award in 2014 for her melody, The Worst. Both of her little girls gave numerous hits to the music business.

Christina is a proud housewife and deals with her children's problems whenever they need advice from her. Her girls figured out how to make a colossal name for themselves in the business through years of mentorship from her.

Her little girl Jhene Aiko is assessed to have a total assets of $500,000 and gains an immense pay from her singing career. Her older daughter Mila J is not as famous as Aiko but she also has a respectable following in the music business.

Christina Yamamoto was a happily married lady who got married to a pediatrician named Karamo Chilombo in 1980. The couple put in some stunning moments together and during their marriage brought forth their three girls Miyoko Chilombo, Mila J, Jhene Aiko and their solitary boy, Miyago Chilombo.

After a long marriage that lasted until 2000 they chose to get a separation. After the split, Yamamoto

Christina Yamamoto gave birth to her first daughter, Miyoko in 1981. The next year, she was honored with another little girl, Mila J. In 1986, she turned into a mother for the third time with her child, Miyagi who passed on from disease at just 20 years old. Her most youthful little girl, Jhene was born in 1988.