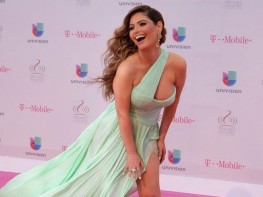 The beautiful actress, Chiquinquira Delgado was born on 7th August 1972. Her star sign is Leo. She was born in Maracaibo, Venezuela. She belongs to Venezuelan nationality and ethnicity. She is nicknamed as Chiqui. Delgado has been a model, host and an actress by profession. She was raised in a Roman Catholic family.

Chiquinquira Delgado was married to Luis Batista from 2000 to 2002. She got married to Daniel Sarcos from 2004 to 2010. She has been in a romantic relationship with the Univision news anchor Jorge Ramos since 2011. Delgado has been blessed with two kids named Carlota Valentina and Maria Elena Davila.

After achieving the beauty title she became one of the Country's top runway models and TV personality. She has been one of the most charismatic personalities in the Entertainment and Show business. Delgado launched her fashion apparel line in collaboration with the esteemed fashion designer David Lerner. The apparels are available on her official website, selected department stores and boutiques.

In the year 2000, she was designated the image of Sony Entertainment. She has been the brand ambassador for Pepsi, Occidental bank and Coca-Cola. Delgado has a line of beauty products called Chiqui, which has gained much popularity in Venezuela. She was featured in the magazines such as Buenhogar, Cosmopolitan and Vanidades. Delgado has been an active Philanthropist. She has been providing aid to charities such as Amigos for Kids and Socievent and Telecorazon. She hosts charitable events like Telethon Mexico and Telethon USA.

Delgado has been the face and fame of Venezuela. She possesses artistic and creative skills that have led her to be one of the most promising Latino stars in the American Entertainment Industry. She has achieved great amount of success in her career. Delgado portrayed Monica in an action-thriller film Pimp Bullies in 2011. She appeared as Eva Amador in a romantic comedy TV series Maria Rosa buscame una esposa.