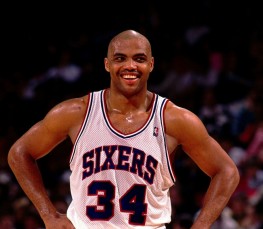 Charles Barkley, born Charles Wade Barkley on 20th February 1963, has been a former U.S. basketball player. Presently, he is engaged as an analyst in “Inside the NBA”. He has been nicknamed as “Sir Charles”, “Chuck”, and “The Round Mound of Rebound”, and has been a dominating power forward of the National Basketball Association. He was included in the All-NBA First Team and in the All-NBA Second Team , not once, but five times. He was also selected for the All-NBA Third Team once. He represented USA in the Olympic Games 1992 and 1996 with the “Dream Team” of the USA, and got two gold medals.

Barkley spent his early childhood days in Leeds, Alabama, a place situated outside Birmingham. He was born to Charcey Glenn, mother, and Frank Barkley, father. He studied at Leeds High School, and could not get included in the Varsity team, but was selected as reserve. However, with a height of 6 feet 4 inches, he was included in the Varsity team as senior, and was offered the starting position. He obtained his Business Management degree from the Auburn University.

He married a former model, Maureen Blumhardt in 1989, while he played with the Sixer. They have been blessed with a daughter named Christiana in the latter part of the same year. There are rumours that they have other children, too, but it has not been substantiated. He is leading a peaceful family life, and has not divorced his wife.

Barkley, though famous for his admirable achievements in the field of basketball, has indulged in compulsive gambling. He has lost much money on this count. Also, he was arrested for driving under the influence of alcohol, and trespassing stop signal. He also tried to spit on a fan for his racial remarks, but ultimately, spitted on a little girl. Consequently, he was suspended for one game without salary, and fined for $10000.

He started his career with National Basketball Association (NBA) in 1984 when he was picked by Philadelphia 76ers. As per the record, he was selected for the Sixers in junior level. However, he began playing basketball in his school days as he had developed interests in basketball early in his childhood. Initially, he was not considered a talent in basketball, but with his height increasing to 6 feet 4 inches, and his spectacular performance in the semi-final match at State High School brought him into the reckoning.

Consequently, he was selected to play basketball at college level in the Auburn University where he played consecutively for three years. He was selected for Phoenix Suns in 1992, and the team reached the final. He won two gold medals in 1992 and 1996 Olympic Games. In 2000, he came to be associated with TNT as an analyst. He won several medals and accolades during his career. As per the record in his biography, he owns a massive mansion at Arizona, and his net worth is estimated at $40 million.