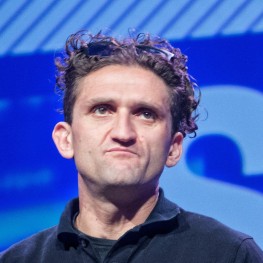 Casey Neistat is a world famous YouTube star who has a total of 9.6 million subscribers. He is a writer, a director and has also starred in the series ‘The Neistat Brothers’.

Casey Neistat was born on 25th March, 1981 in Gales Ferry, Connecticut and had one hell of a journey growing up. Uninterested in his studies, Casey dropped out of high school when he was seventeen. He left his family that same year and fled along with his then-girlfriend and a little son Owen. For the next three years, he lived with his girlfriend Robin Harris and his son in a trailer park. Casey earned a living during this time by working as a dishwasher and a cook in some restaurants. It was during those days of struggle when Casey decided to move to New York in search of a good job.

Casey Neistat began dating his girlfriend Robin Harris during his teenage years and even had a son named Owen. He parted ways with Robin in a few years and got married to Candice Pool twice in 2005 and in 2013. Candice can be seen in some movies that Casey has directed. The couple has been together ever since they got married for the second time and currently have a daughter. Being a social media star, it is necessary for Casey to remain active on such platforms. He has a following of 3 million on instagram.

In an era where YouTube had just started to gain some popularity, Casey Neistat seized upon the opportunity and created himself a YouTube account. His first video upload was that of brake cords attached to train cars. After experiencing a little success with his first video, Casey went on to release few more random videos which had no common genre. As the craze for video logging began to grow, Casey started doing daily vlogs since March 2015. Casey has always been shrewd enough to analyze the upcoming internet trends and act accordingly which is why he has over 9 million YouTube subscribers.

Casey Neistat has always been passionate about creating films which is why he took to YouTube where his talent received recognition. His career in film making began way back in 2001 when he paired up with Tom Sachs and released a series of short films. Within only two years of his debut, Casey got international exposure for his short film in which he criticized Apple.

Subsequently, Casey produced a series called ‘Science Experiments’ in which he released many short films which showed many experiments. This series gained a lot of attention and went on to be included in the ‘59th Minute’ program. Then came the biggest success of Casey’s life which was the release of ‘The Neistat Brothers’ which aired on HBO in the year 2008. For directing and enacting in movies, running a successful YouTube channel, being an entrepreneur and making commercials for various international brands, Casey has a net worth of $12 million.