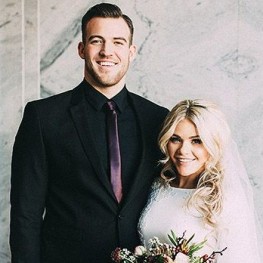 Carson Mcallister is an American dancer who is popularly known for his marriage to reality TV star Witney Carson. Both of them being professional dancers have appeared on a string of TV shows together and earn a livelihood by making appearances together on a variety of stage shows throughout the year.

Carson Mcallister was born in 1993, in American Fork, Utah. It was here that he spent a great deal of the initial years of his life. There is very little information regarding his personal life prior to meeting his future wife Witney Carson.

Mcallister grew up in the same town as Witney, infant the duo attended high school together. In a candid interview Mcallister confessed that though he and Witney attended school together, he was convinced that she was his dream girl since the 7th grade however she didn’t know about Mcallister’s existence until senior year. Once the duo began interacting with each other they soon became close friends and eventually began dating. Post completing high school, Carson Mcallister, went on to graduate from The Southern Utah University.

While Witney Carson geared up to compete in the reality dance competition “So You Think You Can Dance”, which was aired on Fox TV, Mcallister took a break from education and went to Romania, where he spent two years on a mission with the Church of Jesus Christ of Latter-day Saints. The period was a testing time for the couple as they had to make a considerable amount of sacrifices and communication between the duo was limited to e-mail and by occasionally sending packages to one another despite being half the way across the world.

The duo continued their long distance relationship even after Mcallister returned and enrolled himself in college while Carson signed up for Dancing with The Stars.

Mcallister began dating Witney amidst intense public speculation, while Witney later confirmed their engagement on the social media application Instagram, on October 3rd 2015. The couple decided to take the plunge in 2015 and set the date for the wedding on January 1st 2016. The wedding ceremony took place at the Salt Lake Temple in Salt Lake City, while the duo got married at a small ceremony which was attended by her fellow dancers Jenna Johnson, Emma Slater and Brittany Cherry, from the reality TV show Dancing With The Stars. The couple toasted a grand dinner reception for extended friends and family at the NOAH’s Event Centre in Lindon, Utah. The couple are truly in love and there are no rumors of a divorce.

In his biography, Carson states that he is passionate about dance and it is due to his shared interests with his reality TV star wife Witney Carson, that he has been able to carve a business empire involving the both of them making appearances and performing together on reality TV shows and live stage programs and social appearances. This also greatly contributes towards their combined net worth which is currently estimated to be in the range of two-hundred and fifty thousand USD to three hundred thousand USD.