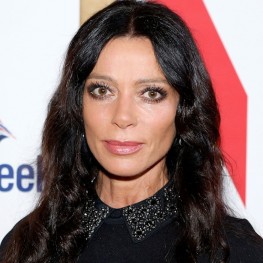 Carlton was born in South Africa, but she eventually relocated to Los Angeles with her father, mother, and two brothers. She grew up in South Africa and England before moving to Southern California to seek a career as an actress.

Carlton Gebbia was born on October 17, 1973, in South Africa. She experienced childhood in London and South Africa before moving to Los Angeles to pursue acting. Carlton used to run privately-owned family companies with her ex-husband along with his father and two siblings. The companies they ran included StockCross Financial Services and Rival Sports Group, which manages NBA and NFL players.

She is also the owner of Gebbia Custom Estates, which develops top-of-the-line custom homes in Beverly Hills and Hidden Hills, where Carlton is the interior architectural designer. Carlton takes extraordinary pride in having designed her Gothic-style home in Beverly Hills.

Carlton has been very successful in her career, but her most noteworthy achievements are her three children. She had three kids, Destiny, Mysteri, Cross, with her former better half, David. At the time she had her children, she once called David her perfect partner.

In 2016, their marriage started to end in a bitter split. Their marriage lasted for 15 years until things didn't work out for the couple anymore. David petitioned for legal separation in November 2017, referring to hopeless arguments between the two. Carlton and David put their house on sale for $22 million. The house was precious for many reasons. The house had gotten famous because of Carlton's rising fame in the reality TV industry.

Carlton commented on her divorce in a post on her Instagram account, "Guess I'm the last to find out, officially divorced, and I think now the game begins. You broke my heart." She was not shy of hiding her much; she was heart.

After the split, Carlton has been entirely focused on her children. Without her bickering ex-husband bothering her, she wants to make her children the best people they can be. Her girl, Destiny, made her New York Fashion Week debut in the Romeo and Juliet runway show. She thinks that her daughter has incredible things lined up for her in the future. She does not want her daughter to rely on her fame and would rather see her daughter carve her path as a model.

Net Worth and Real Estate

When they were on the Real Housewives, Gebbia and her former husband David lived in a 12,800 square foot estate in Beverly Ridge Estates, an upscale gated community in Beverly Hills. Gebbia Private Estates designed the estate, and Carlton worked as an interior designer on it, but she advertised it for $22 million in May 2018 and sold it for $13.9 million in 2020.

The multi-talented artist, who enjoys acting as well as interior design, lives a luxury lifestyle. She makes the most of her earnings from her job and commercial ventures, and her net worth is estimated to be approximately $150 million.