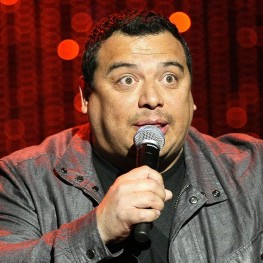 Carlos Mencia is a popular writer and a comedian. Though he began his career as a mere standup comedian, he has also earned fame as an actor.

Carlos Mencia, born as the seventeenth son of his parents Magdelena Mencía and Roberto Holness, has been neglected a lot by his parents. Just after Menacia’s younger brother was born, his parents parted ways. He was given the title of his mother after his birth. However, he has always been in terms with his father and has also accepted his title till he was eighteen years old. He grew up to his aunt and was brought up as a Roman Catholic. As he had several responsibilities at home, he never got the chance to make many friends. However, later in his teenage, he got addicted to drugs which declined his health.

Mencia has completed his schooling from the Garfield High School and went to California State University, Los Angeles to pursue electrical engineering. However, while at the university, he developed a sudden urge towards comedy and left his education midway to pursue his passion. Mencia is leading a smooth life with wife and child.

Carlos Mencia began his career as a comedian with The Comedy Store. The owner of the store suggested him to change his name to Carlos which would help to attract more people. After impressing the audience at The Comedy Store, Mencia got the chance to appear at The Arsenio Hall Show. He was even awarded with the title of "International Comedy Grand Champion." Leading to his huge popularity, Carlos was given the chance to host the HBO show, Loco Slam.

After hosting several shows, he appeared in the stand-up comedy, "The Three Amigos." He was seen with Pablo Francisco and Freddy Soto. Mencia has also received the CableACE Award for his incredible performance in the two and half hour special shows on HBO in the category of Best Stand-Up Comedy Special.

After his consecutive hit comedy shows, Mencia was seen in Comedy Central Presents which still counts as one of his best performances. Mencia’s huge popularity as an actor lead him to do some guest appearances as an actor. He was seen in several television series like The Proud Family, The Shield, Moesha and more.

From the year 2005, Mencia began sketch comedy along with his stand-up comedy and came up with the show Mind of Mencia with Comedy Central. The show became so popular that Comedy Central had to come up with another season. In the path of success, Mencia had to come across several criticisms and rumours. It first happened when he was regarded as one of the worst comedians by Maxim. It accused Mencia of stealing jokes from some of the popular comedians. Several accusations came upon him during this time but nothing could be proved.