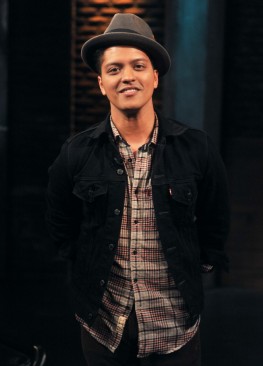 Bruno Mars is an American singer, songwriter, music producer, and dancer who was born on October 8, 1985, in Honolulu, Hawaii, in the United States. His birth name is Peter Gene Hernandez but he goes by the stage name Bruno Mars which was given to him by his father when he was just two-years-old. He grew up in the Waikiki neighborhood of Honolulu with his five siblings but moved to Los Angeles, California in 2003. Both his mother and father were musically inclined and made a living as singers. When he was five-years-old, Mars joined his family on stage to perform five days a week with the family's band, The Love Notes. Mars made his film debut in a cameo role in the film "Honeymoon in Vegas".

He decided to pursue his career in music in California and was signed to a contract with Atlantic Records in 2009. He quickly became popular with his collaborations on singles such as "Nothin' on You" by B.o.B and "Billionaire" by Travis McCoy. He released his first studio album "Doo-Wops & Hooligans" in 2010. The album went on to peak at number three in the United States and had multiple hit singles including, "Just the Way You Are", "Grenade", and "The Lazy Song". He went on to win a Grammy Award for Best Male Pop Vocal Performance. He has gone on to enjoy widespread success and has sold over 130 million records across the world. Mars has been dating model Jessica Caban since 2011.