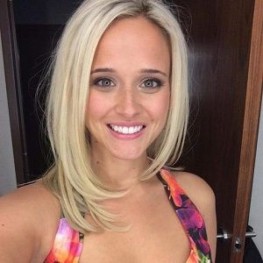 Brianne Aron is a famous American model, till date she is known for her exceptional features and her active participation in the world of modelling. Her popularity also stems from the fact that she is the wife of well-known American Baseball Player, Christopher Allen Sale of the Chicago White Sox.

Brianne Aron was born in the city of Chicago, Illinois, in the United States of America. Details about her family and her parents are not known to the media. However, after school, Brianne attended the Florida Gulf Coast University, it was there that she was studying Public Relations and Public Communication. At the Florida Gulf Coast University, Brianne met her future partner, who was then an upcoming baseball player, Christopher Allen Sale who today, is popularly known as Chris Sale.

The couple began dating in college and their relationship was taken further when the couple had their first child, a boy they named Ryan. Ryan, was born to Brianne and Chris when they were yet in college. After having a child and dating for a few years the couple got married on November 11,2011, as it was the once in a century date of 11/11/11. The wedding nuptials took place in Fort Myers, and exactly after one year it was followed up by a legal joining reception. Brianne and Chris later on welcomed their second child into the world, in December 2016.

Though there were some rumour regarding a split, headlining on various blind articles and celebrity gossip forums, the couple stood united and in a firm statement to the media and their fans, assured everyone that there was no trouble in paradise.

As a Public Relations and Public Communications student, with some experience and knowledge in philosophy, Brianne always had an interest in creative work and the print media. She soon landed a job with Creative Adventures, an organisation based in Florida. Here she worked as a character and princess impersonator.

Notching up 3 years of expertise in the creative field, she switched to Embassy Suites to work in the capacity of a Front Desk Clerk. Two years into this line of work Brianne again decided to move on and decided to pursue a career in modelling, in which she always aspired to make it big and a field she was genuinely passionate about.

Brianne being a good looking young female, with naturally blonde hair, light brown eyes and just about the perfect weight to height ratio was accepted into the modelling industry with wide arms.

In her biography she states that her experience in the creative field, which she had gained at Creative Adventures had helped her greatly when she started out as a model. It had helped her develop creatively and enhance her skills. It was when she began working as a model full-time, that Brianne achieved great success in this field, with her individual net worth being over 2 million USD. Despite the fame and success, she has confessed that she takes great interest in managing the affairs of the house and spending time with her children.