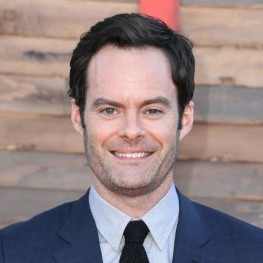 Bill Hader is known as a popular comedic actor. He is most famous for his time on Saturday Night Live as a performer and writer.

William "Bill" Hader was born on June 7, 1978 in Tulsa, Oklahoma. He was born into a family that had a passion for the arts. His mom, Sherrie, was a dance instructor and his father worked different occupations to support the family. He had blue collar jobs like truck driving and restaurant management. He even fiddled with the art of stand-up comedy. As a kid, Hader adored film and realized that he needed to live out his grown-up life in media outlets.

Hader worked after school during his young years to fund raise for the production of his own short films. He was inspired but classic cult low budget films like Sam Raimi's 1981 The Evil Dead. After finishing various shorts through during his youth, he was set on the right path to an excellent career in the entertainment industry.

Hader went to New York and tried out for a team of Saturday Night Live producers which included Lorne Michaels and Tina Fey. His demonstration of his comedic talent included impressions of Tony Blair and Al Pacino. He also presented a unique character named Vinny Vedecci that impressed the show runners. Hader was invited to Saturday Night Live in 2005 as a new recruit however he rapidly turned into a regular cast member. Hader's prosperity and success on SNL has been credited to his spot-on impressions and his celebrated repeating characters including "Stefon," the super New York club reporter.

Wife and Divorce with Maggie Carey

Bill Hader was recently married to Maggie Carey. He met Maggie while performing in a sketch group in a patio in Van Nuys, California. She was sitting in the first row and they were introduced to each other by a shared companion after his performance.

They were married from May 2006 to June 2018. His ex wife, Maggie Carey works as a movie producer and she has won honors for the two documentaries. One reason why he left Saturday Night Live was because his wife wanted to explore more opportunities in Los Angeles.

During their marriage, they gave birth to 3 children. Hader and Carey had their first child, a little girl named Hannah Kathryn on October 6, 2009. Their second little girl, Harper was born on July 28, 2012. Their third girl, Hayley Clementine was born on November 15, 2014.