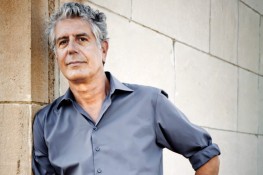 Anthony Bourdain is an America TV personality, chef and an author. He became popular owing to the success of his book, ‘Kitchen confidential’. Now, he has joined CNN to host Anthony Bourdain: Parts Unknown. He began his career as a dishwasher and gradually grew to the position of executive chef.

Anthony married Nancy Putkoski, his high school girlfriend and the couple was connected for nearly 2 decades, before divorcing each other. Anthony mentioned that extensive travel associated with the jobs was the main reason. No extramarital affair was publicly known to exist in his life. He got married again to Ottavia Busia in 2007 and they have a daughter together.

He said his best friend set him up on a blind date with Ottavia. His friend saw something similar in them but did not anticipate that they will fall in love, get married and have a child. He calls his marriage, as a sweet accident. He was 50 when he became a father and said at last he became old enough to take that job responsibility. His dating life was too speedy. He met Ottavia at the cigar bar for the first date and then in Masa. A few dates later, they had matching tattoos of a chef’s knife on their shoulders. After a few dates, they got married. Busia is seen in many TV episodes of ‘No reservations’.

He received many awards for his works like the Food writer of the year, Food book of the year award for his book, ‘A cook’s Tour’. He won Emmy Award for Outstanding cinematography. Though Anthony was a well established writer and chef, his fame started with the Kitchen Confidential: Adventures in the Culinary World. Travelling and cuisine fit Bourdain perfectly and in 2005, Anthony Bourdain: No reservation was launched and is still going strong in its eighth season.

His other awards are Webby award for the best blog, Emmy award for the Beirut episode of Anthony Bourdain: no reservation and also nominated for a Creative Arts Emmy Award. He was also awarded the honorary CLIO Award that is given to people who change the world by thinking differently. He appeared in many food programs, series and animation episodes.

Anthony mentioned that he grew up in a neighborhood, struggling with the social mores. He wanted to be an underground cartoonist but was too lazy to apply himself into anything. He once mentioned that he does not believe in a higher power and was raised, without religion being a part of his life.

He is known to be an unrepentant drinker and smoker. He used to smoke two packs a day untill his daughter was born. He was also known to use cocaine, heroin and LAD earlier. His liberal use of profanity and sexual references in his television show caused heavy criticism and later led to usage of animation that relates to the episode. He is also known for consuming exotic local specialty dishes like ant eggs, raw seal eyeball, cobra, fermented shark and many others. He is a critic of the vegetarian or vegan style of eating.