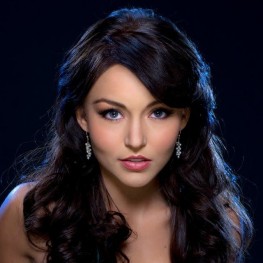 The French-Mexican actress Angelique Boyer was born on 4th July 1988. Her star sign is Cancer. She was born in Saint Claude, France. The attractive actress is 5 feet and 5 inches tall. She is of French nationality. Boyer is of French ethnicity. She is a Roman Catholic by religion. Boyer was born to Sylvie Rousseau (deceased) and Patrick Boyer. Her birth name was Angelique Monique Paulette Boyer. Boyer currently resides in Mexico. She attended Centro De Educacion Artistica, an educational entertainment institution. She always had the passion for entertainment. Boyer is 29 years old.

Boyer dated an American-Mexican singer Diego Boneta from 2006-10. She was rumored to be dating another Mexican actor Sebastian Zurita. She was married to Jose Alberto Castro from 2011-14. Castro is a Mexican director and a producer. He was born in Mexico city. Boyer then married Sebastian Rulli in the year 2014. Sebastian is an Argentine model and an actor.

Boyer played Sandra in a Mexican TV series Alma De Hierro (Soul of Iron). She played Angela Villareal in a Mexican TV series Corazon Salvaje (Wild Heart), in the year 2009. Boyer is very fond of singing, as she has been a singing member of C3Q'S. She is also a member of a singing group called Little Green Radishes. Boyer was the opening act of the show in Mexico by American band N'Sync. Music was a very big influence on her in her early life.