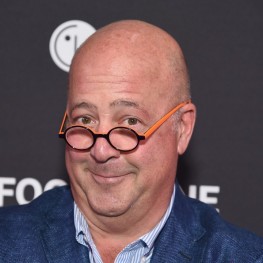 Andrew Scott Zimmern is a James Beard Award-winning chef from New York who is a well-acknowledged star of the American television series, a food writer, blogger, teacher, co-creator, the host as well as an advisor of the series at the Travel Channel named ‘Bizarre Foods’.

Andrew Scott Zimmern was a Jewish boy born to Robert and Caren Zimmern on July 4th 1961 born in New York City. He started his primary cooking classes when he was 14 years old. Zimmern studied at a school named Dalton and graduated from the College of Vassar. Due to his critical alcohol intakeand drug dependence, Andrew was vagrant for about a year and during this time period his means of survival was theft, he pickpocketed customers at cafes.

Later in the year 1992, Zimmern relocated to Minnesota and moved into a Treatment Center for alcohol and drug dependency named Hazelden. He is now participating in providing facilities to this centre. He currently lives in Edina, Minnesota with his spouse, Rishia Haas and has been blessed with a boy Noah. His personal life isn’t in the limelight as his career path.

After his recovery from the drug and alcohol addiction, Zimmern was later widely celebrated during his approximately five years period as an executive chef at the Café named Un Deux Trois in the Forshay’s Tower of Minneapolis. As a culinary expert, his menus got highest stars from various magazines like the Minnesota Monthly, the Minneapolis Star Tribune, a press named St.

Paul Pioneer and the Minneapolis St. Paul Magazine. Zimmern is now an editor and a prize-winning monthly writer at the Minneapolis St. Paul Magazine and a senior rewriter at a magazine named Delta Sky. He is now the international representative for the Elite Destination Homes and the Travel Leaders. Andrew also hosts a show called “Feasting with Death” which informs about the kind of food that can be fatal if consumed.

Andrew Zimmern appreciates going far and wide for investigating food in its local district, wherever it is found. He has contributed in some of the New York’s finest restaurants as an executive chef or general manager. He left daily restaurant operations in 1997. His biggest career hit was a series at a Travel Channel - Bizarre Foods with Andrew Zimmern, Bizarre Foods America, Andrew Zimmern’s ‘Bizarre World’ and ‘Bizarre Foods: Delicious Destinations’, featuring over 15 seasons and over 100 of episodes, with Zimmern visiting total 32 countries and 14 U.S. states.

Zimmern has been a chief guest to many professional associations on all culinary matters around the globe where he lectures and gives demonstrations on the various Chinese cuisine. He also has a stand named after him called the ‘Andrew Zimmern’s Canteen’ at Target Field in Minnesota. Before ‘Bizarre Foods’, Andrew has also worked as a radio personality with his shows- Andrew Zimmerman Show, Chowhounds andThe Food Court With Andrew Zimmern achieving wide popularity in Minnesota. As a food writer, his book named ‘The Bizarre Truth’ series got printed by a company called Broadway Books in the year of 2009. Zimmern is the recipient of two James Beard Award till now, one in May 2010 and another in 2013.