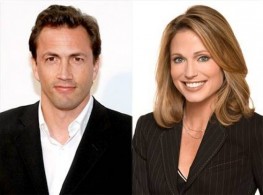 Andrew Shue was born on February 20, 1967 in South Orange, New Jersey, USA. His mother, Anne Brewster is a bank executive and his father, James W. Shue was a lawyer and real estate developer and was active in Republican politics. Andrew went to Columbia High School, in Maplewood, New Jersey where he along with his sister became members of the Hall of Fame in 1994. From Dartmouth College, Shue received his B.A. in history in 1989 where Andrew was also a Regional All America soccer player. He spent a winter studying and playing soccer in Glasgow, Scotland for Queen's Park FC.  After graduating, he visited Zimbabwe, where he simultaneously played soccer and taught high school math.

In April 2009 Shue met former co-anchor of the show `The Today’ and ABC News correspondent Amy Robach at a book party; by September they were engaged. On February 6, 2010, Robach's 37th birthday, they got married at The Lighthouse at Chelsea Piers. After marrying Amy, Andrew became stepdad to two daughters Ava (2003) and Analise (2006).

Andrew started his career as a professional athlete; playing soccer with the `Los Angeles Galaxy’ for two seasons. Then he stepped into the whole new world of acting. In 1992 he was casted by Aaron Spelling on "Melrose Place" playing the role of Billy Campbell. In 1996, he became the first professional athlete to both play and act on a TV show at the same time.

Also his philanthropic personality has led him to establish a voluntary organization called `Do Something’.

Andrew Shue has a gentle heart and determined personality. Also his looks are admirable. He was named one of 10 Outstanding Young Americans by the Junior Chamber of Congress and was given an honorary degree from Drew University in 1995.

Andrew Shue has earned a fortune from his career; first by being a professional athlete and then a Hollywood actor. In the meanwhile he started his website `Cafemom.com’ which is now estimated to have the worth of $200 million. Besides Andrew also has a philanthropic heart, so he founded a teen volunteer organization called `Do Something’ which is also in operation and working at its fullest. All these efforts of Andrew Shue since the beginning have now made him worth around 100 million dollars. He is included in the list of the richest people in the world.