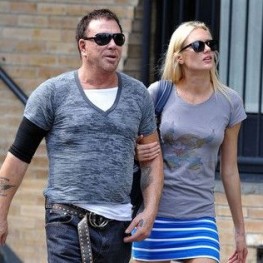 Anastassija Makarenko also known as Anastassija Mak is a model who was born in Russia in the year 1986. When she was still young, the family went to live in Germany from Russia. Her mother decided that her daughter is a beautiful and she can become a fashion model. When she was 16, she sent some of her pictures to model agencies. When the agencies got the pictures, she was invited to join. Anastassija Makarenko got much attention and she had worked in different countries. She is now living in the city of Los Angeles.

Anastassija Makarenko has also worked as an actress, appearing in A Good Day to Die Hard film with Bruce Willis.

Anastassija Makarenko had also been on the cover of different magazines like Issue 9 of Lash in USA, at GQ in 2009, October and 2012, September, in UK. She was also in issue 9 of Lash Magazine and Femina in France.

She is said to be in relationship with Mickey Rourke, a Hollywood actor. Mickey said that he is committed to this relationship and he will not be able to forgive himself in case he cheats. The two met in the year 2009 while doing the photo-shoot of GQ magazine and they are a couple from that time. Rourke had been in many relationships before with other celebrities include Sasha Volkova and Terry Farrell. He got married two times.

In the year 1981, he was married to Debra Feuer and they divorced in 1989. He got married again with Carre Otis who also appeared as his co-star in movies. They married in the year 1992 and they divorced in the year 1998. Rourke stopped to appear in movies for over 14 years, and he says that his comeback was attributed to David A Unger, his agent. He had also weekly meetings with a Catholic priest and a psychiatrist. Rourke is known as a good catholic. Rourke is also a pet lover and likes small-breed dogs. His dogs are called Chihuahuas but not purebred. He has a dog called Loki which he describes a love of his life and it is a mix of a Chihuahua and a terrier.