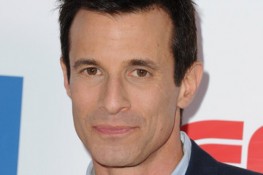 A.J. Hammer is the anchor for HLN’s evening entertainment show, Showbiz Tonight and has been hosting this show, ever since it was launched in 2005. He also hosts various entertainment reports as a correspondent for CNN. Hammer graduated from the University of Hartford, with a degree in philosophy. He has been in the entertainment industry for over 20 years now. He was obsessed with the ‘radio work’ right from the age of 11 and started his career at the young age of 15, as a broadcaster for WNBC Radio. Prior to joining HLN and CNN, he hosted a show on crime and justice, ‘Hollywood Heat’, for Court TV, during the period 2001 to 2005. Hammer rose to fame during his four-year stint at VH1, where he hosted one of the channel’s highly rated music and entertainment show, "Top Ten Countdown"; a show featuring interviews and music videos of various celebrities. Hammer spends his spare time with Birch Services, an AIDS service organization in New York, which sponsors camps for several AIDS patients.

Hammer has somehow managed to keep his personal life completely out of media glare. Any news that goes around regarding his marriage and affairs are mostly baseless rumors. The only relationship that Hammer has ever mentioned about in an interview was with his girlfriend, which was during his educational stint at the University of Hartford. However, this too doesn’t show any indication of a serious relationship. The common news around is that AJ Hammer is already married to Wendy Williams and speculators support their theory with claims that he wears a wedding ring. There are also some unverified reports which claim that the man was having an affair with his then co-anchor of Showbiz Tonight, Brooke Anderson, and is contemplating a divorce with his wife, in favor of settling with her. All these reports, no matter how entertaining they are, appear to be nothing but just rumors by the desperate public interested in Hammers undisclosed personal life. His twitter profile has a photograph with Wendy, just as a friend and has no indication of any serious relationship with her. Those who could not prove him married or catch him having an affair, found it easier to declare him as ‘gay’. Hammer had once spoken in favor of legalization of gay marriage. That became the talk of the town and led to a new set of rumors claiming that he was gay like his CNN counterpart - anchor Don Lemon, and also has a boyfriend.

After all that has been said, the fact remains that AJ Hammer, till date has never mentioned anything about his marriage or affairs, neither has he accepted or rebuked the ‘gay’ theory. He seems to be genuinly unaffected by all these rumors and prefers to leave them the way they are. AJ Hammer is known to be an ardent lover of animals; hence the only love that’s known about in his public life is his love for animals. Oops!!! I just said it; hope we don’t hear some new rumors now.