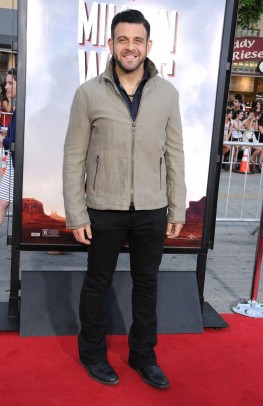 Who is Adam Richman?

Adam Richman is an American Actor and Television personality. He has hosted various eatery programmes, dining and eating challenge programs on the Travel Channel.

How old is Adam Richman?

Born on 16th May 1974, into a Jewish family in Brooklyn, New York, Richman was raised near the neighboring borough of Sheepshead. He is 44 years old.

Does Adam Richman have a wife?

Adam Richman is not married. However, the rumors have linked him with a few names like Tamron Hall, Myleene Klass. In May 2017, he shared a picture of his get-together with American Journalist Tamron Hall which surprised his fans if the two are dating each other. However, it is reported that he is single now and not dating anyone.

childhood and education of Richman

In his early childhood days, he attended Solomon Schechter School and then a Talmud Torah High School. At the end, he graduated from Midwood High School. He completed his undergraduate degree from the University of Emory, Atlanta, Georgia in International Studies. During his days in Emory University, he was a member of Alpha Epsilon Pi fraternity. Afterward, he earned his Master degree from the Yale School of Drama.

He also completed his Apprentice at the Actor’s Theatre at Louisville.

How is Richman’s diet? Is he a vegan?

Adam is popularly known for his program ‘Man Vs Food’. He is a self-educated food expert and a sushi chef. He maintained a register of all his visits to different restaurants, he made, since 2015. Before the challenge program, Adam would not eat for a whole day but he used to try staying hydrated by drinking lots of water or club soda. He avoided coffee and soft drinks. However, the competitive eating made him gain a considerable amount of weight and that depressed him. It is not reported whether he is vegan. However, in 2015, he told ‘The Independent’ that he eats a vegan diet for training purpose.

How much are Adam Richman’s Net Worth and his earnings?

Adam Richman has earned a decent amount being a Television personality and an actor. He was reported to receive around 35 dollars per episode of Man Vs Food. At present, his Net worth is around 10 million dollars.

The reports also say that Adam appeared in several National TV Commercials which is a good source of earnings. He also worked in a few TV soap opera and drama.

He also played role in various Drama and Soap Opera like Joan of Arcadia, All My Children, My Ex Life, Law & Order: Trial by Jury and Guiding Light.