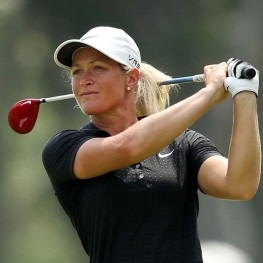 Suzann Pettersen is a golfer by profession and is one of the fittest and the most athletic player among the women in the field of golf. She was born on 7th April 1981 in Oslo, the capital and the most populous city in Norway. At the tender age of just 6 years, she began playing golf and participated in her first golf tournament at that time. Suzann simply loved playing any kind of sport; tennis, skiing, football and basketball were her regular games. However, it was golf that caught her attention more and she excelled and rose to fame in the game. She has won many titles as an amateur, starting with ‘The Norwegian Amateur’ title, which she won consecutively for five years from 1996 to 2000. She participated and won her way to the ‘British Girls Championship’ title in 1999 and then the ‘World Amateur Championship’ in the year 2000.

At the age of 19, she became a professional golfer. She left Norway and moved to Orlando in Florida as the place provided her with better golfing conditions which were essential for her to compete. During the season of 2001, Suzann won the ‘French Open’ tournament and was ranked second at the ‘Ladies European Tour’ tournament. She is a winner of five ‘Ladies European Tour’ tournaments till date. The year 2003 was a significant year in her career, as she graduated from being a rookie to a professional player, by qualifying for the Ladies Professional Golf Association Tour. In her career as a professional golfer, Suzann has participated in 189 tournaments, of which she won eight and was ranked 2nd on 14 occasions. She was delighted to achieve in 2007, what she considered as the biggest dream of her career; winning the ‘Ladies Professional Golf Association Tour’ championship. She also won the Solheim Cup on two occasions, in 2003 and 2011, as a representative of Europe.

Suzann loves travelling around and interacting with people of different cultures; thanks to her profession as a golfer, she got the opportunity to play as well as explore various places around the globe. Other than golf, Suzann spends a major part of her time in fitness. She works out a minimum of two hours a day for the whole week, doing stretching exercises and pumping iron. She loves being around with her family and friends and makes it a point to take some time off for them.

On the relationship front, Suzann has maintained a high level of secrecy. She surprised everyone by stripping for the ‘ESPN Body Issue’, making it all the more difficult for people to believe that she doesn’t have a boyfriend. Either it’s hidden from us or perhaps she is so focused on her career that she has no time for passing affairs. Although there are rumors that she has secretly entered into marriage and later taken a divorce from her husband, there is no evidence to substantiate those claims. As of now, the official word from the Suzzan is that she has had only one serious affair, ‘golf’, and there doesn’t seem to be a chance for anyone else as long as the girl keeps going with the game.