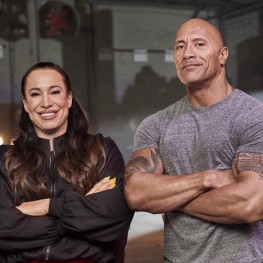 Dany Garcia is the President of The Garcia Companies, a Media Management Company, founded by her. She has worked on many media projects including films, television and sports. Her career started in the financial industry, initially with Merrill Lynch and later, with JDM Partners LLC in 2002 where she served as a founder and CEO of an investment advisory firm that mainly served individuals, having a high net worth. She is also well known for her philanthropic work in many social fields and has received awards of recognition from several notable organizations, for the same.

Dany Garcia first met her then boyfriend Dwayne Johnson, also known as “The Rock” while attending college at the University of Miami, from which she graduated in 1992. After around 7 years of romance, they both entered into marriage a day after Dwyane turned 25 on 3rd May 1997. The couple was blessed with their first child, Simone Alexandra, their daughter, who was born on 14th August 2001. After 10 years of living a happy married life, Dany officially sought divorce from her husband Dwyane, in June 2007. There were no specific reasons mentioned of their split. After their decision to split, rumors spread around the town that the cause was Dwayne’s affair with another woman. There have been no confirmed report of these rumors, but the fact remains that Dany and her husband Dwayne have had one of the most amicable divorce settlements ever. Their marriage did not end in a bitter feud; instead they amicably revealed their desire to separate. Moreover, the two have never spilled dirt on each other nor have they behaved like other Hollywood couples, who end up their relationship by thrashing each other. Such a nature of divorce makes their split, all the more interesting, to people. Till date, Dany and Dwayne continue to regard each other as best friends.

Dany and Dwayne have split custody of their daughter and Dwayne pays 22,000$ as child support. The ex-couple have also set up an education account for their daughter and each of them has agreed to deposit five thousand dollars a month, into the same. This money would take care of Simone’s schooling and college education. However, the couple has taken utmost care to ensure that their daughter, Simone is not affected. due to their relationship split. The two ensure that they always maintain a positive relationship, which is a very crucial factor in co-parenting their child. In fact, after divorce, they claim to have become more compatible in working together and raising their daughter. Their daughter is free to call up either of the parents anytime and can speak for as long as she wants. They have also agreed to accept any emergency decision concerning the child, which has been taken by either of the parents. Dany and Dwayne also teach their daughter to express equal love and respect for both the parents. Simone is one of the luckiest children of our generation whose parents despite having split have made all efforts to raise their child in the best possible manner.